On November 20th Hank Marvin and his Gypsy Jazz Quartet played to 436 people in a packed out Maidment Theatre at the Auckland University. The Theatre has possibly one of the best acoustics of any Auckland venue and is usually used for many theatrical plays. This was an unusual breakaway from the tradition and feedback on just how popular this was is astounding. A sellout is always a great achievement and this was no exception.

This was the final concert of the New Zealand section of the 2015 tour and it would not have been possible to have achieved without the help and assistance of John Campbell. Not only did John stand up to the plate, join the tour from the beginning in Nelson, all at his own cost he was outstanding with his contribution to the tour itself. John did the driving for the group, he assisted with the sales of merchandise and generally went out of his way to ensure everyone was well taken care of. John has always been an avid “Shadows” fan and he made no secret of that. For many years John has been dedicated to the “Shadows” recording history in New Zealand and has done a sensational job of documenting it at www.penumbra.co.nz

Here is a picture below of John at 6am on November 21st 2015 ready as always to see the group arrived at the airport on time for their trip to Melbourne. 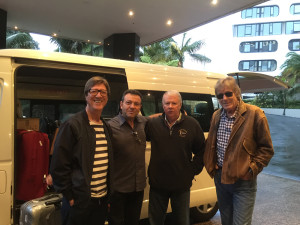