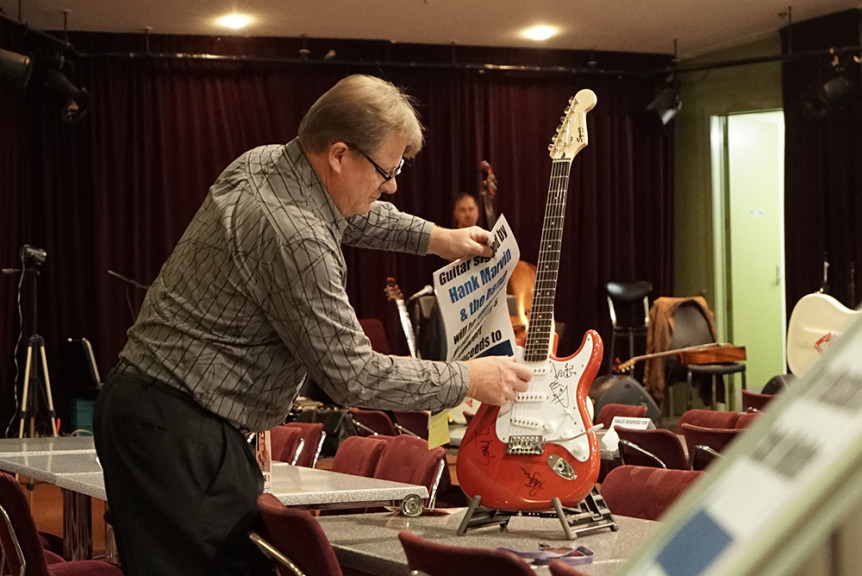 After an enjoyable stay at the Quest Hotel Apartments in Nelson city in the South Island of New Zealand, the Hank Marvin Gypsy Jazz group flew over to Wellington at 10.30 am from a lovely sunny day to an overcast and rainy day at the bottom of the North Island. The gig that night 15th November 2015 was at the Upper Hutt Cosmopolitan club and we were picked up at the domestic airport by Vinnie a very capable and obliging driver.
After checking in at the Hawks Motel we were transferred to the club for lunch before setting up for sound check and rehearsal around 3pm. Mark Southern was the sound guy who looked after the equipment for the club and he also was a part time entertainer at the club itself. It was here we met with Andrew Shan a colorful character who had donated two guitars to the club. Once signed by Hank Marvin one of these guitars was auctioned off later in the evening and reached $950, the proceeds of which were donated to free ambulance service in Wellington. The other guitar which was also signed by Hank was to be displayed in the club in a glass case along with many others.
Our gig kicked off at 8pm after Mark Southern had performed his set. The crowd here were buzzing and really appreciated the sensational performance by the Gypsy Jazz Quartet.