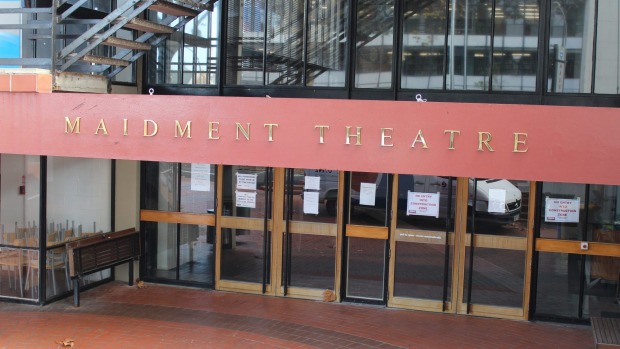 November 20th 2016 was the 12 month anniversary of the Hank Marvin Gypsy Jazz concert at the Maidment Theatre in Auckland New Zealand. Since that time it is very sad to report this wonderful theatre has now closed. More than likely it will be a permanent closure due to the fact it would require a major upgrade to bring it to a suitable level of safety in the event of an earthquake. This happened just prior to Christmas 2015 only a few weeks after Hank Marvin Gypsy Jazz group played at this stunning theatre.

Below is a report from the New Zealand Herald outlining the details.

One of Auckland’s busiest theatres is closed indefinitely because it has been deemed an earthquake risk.

The Maidment Theatre, at the University of Auckland, closed the week before Christmas without fanfare.

A university spokeswoman said a routine review of buildings by a consultant engineer had found it required seismic strengthening.

She said the complex, which includes the Maidment Theatre and the smaller Musgrove Studio Theatre, was closed for the foreseeable future as a precautionary measure and staff had been moved to other buildings.

“The university regrets the disruptions this will cause but considers the safety of its staff and public paramount.”

Auckland Theatre Company and the Auckland Arts Festival need to find new venues for productions booked into the Maidment.

ATC’s general manager, Lester McGrath, is confident of being able to secure new venues for four of its shows and says disruption to play-goers will be minimal.

In 2013, ATC had to scramble to find alternative venues for two productions when an overheated stage light set a curtain on fire. The fire spread into the ceiling but damage to electrical equipment was not as serious as first thought and the theatre reopened three months later.

ATC opens the $36.5 million ASB Waterfront Theatre this year and Mr McGrath says it will be a great relief not to have to deal with venue-related issues. “The fire and the latest closure reinforce the need to get core infrastructure sorted out,” he says.

“[But] everyone has been fantastic in helping us to find new venues.”

Auckland Arts Festival chief executive David Inns is negotiating with other venues to find a new location for Brass Poppies, booked at the Maidment from March 10-12.

He says the opera, written by Ross Harris and Vincent O’Sullivan, has a distinctive design and he wants to ensure this can be replicated at the new venue.

The Maidment Theatre, opened in April 1976, was named after Dr Kenneth Maidment, who was the University’s first Vice-Chancellor. The smaller theatre had a series of name changes until, in 2004, it was renamed the Musgrove Studio Theatre to honour former English department head and Shakespearean scholar Professor Sydney Musgrove.

Last year the Government said it was revising its earthquake-prone buildings legislation.

For those of you interested the original article is here: