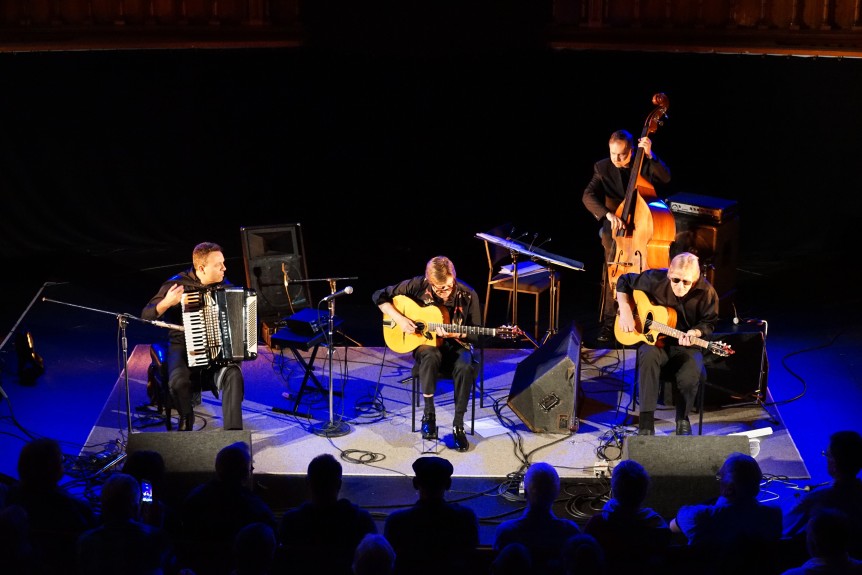 The Hank Marvin Gypsy Jazz group arrived into Nelson New Zealand on Friday 13th of November after an overnight in Wellington. The group traveled from Perth Western Australia via Sydney a rather long flight finally getting into their hotel there after midnight. The quick flight across to Nelson was around 25 minutes and Hank was invited to sit behind the captain to view the Marlborough Sounds on a stunning day.

As there was no concert planned on the Friday evening Hank and his wife Carol attended the Boathouse restaurant and bar where a local band by the name of Django’s Junkies were performing. It did not take long before Hank was on stage jamming a couple of well known tunes with the local group, much to the delight of many patrons.

The following day the group wandered around Nelson City and generally relaxing before setting up for the concert in Old St John’s, once an old Church saved from destruction by Ali Bostwick and her husband,  now  being used as wonderful venue for hosting many concerts and artistic performances.

The Saturday performance started at 7.30pm and there was no sign of jet lag, or any lack of energy in the boys after the long flight the day before. This very first New Zealand concert, and the second of their 2015 tour was a knock out and the Nelson crowd responded with a standing ovation.