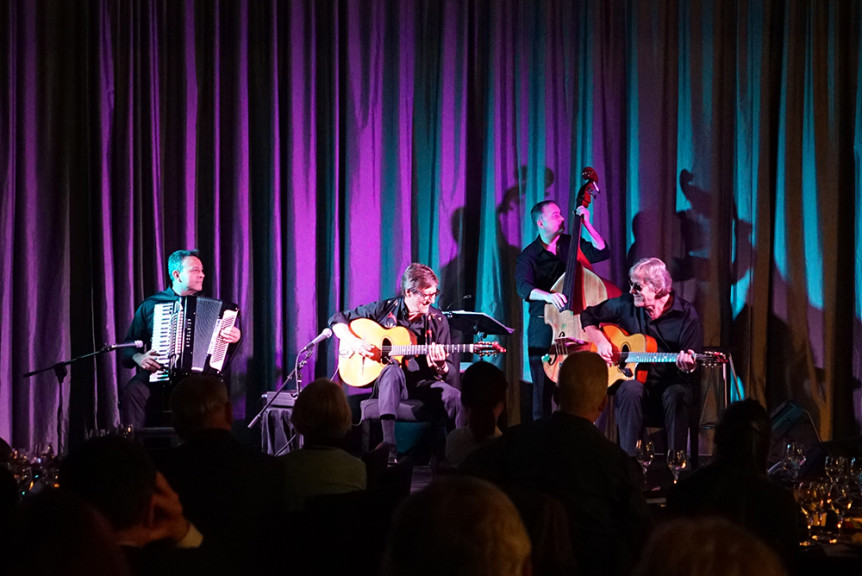 The Northern Club was founded by a group of prominent professional and business men in the year 1869 when the popularity of a gentleman’s club was at its peak throughout the British Empire.

The four storey building, a high-rise in its own time, was originally designed as a hotel and built on the first section sold at Auckland’s inaugural land sale in 1841. Following the purchase, architect Edward Ramsey was commissioned to rearrange the hotel’s internal rooms for use by the 120 founding members.

Membership of the Northern Club attracted many leaders of the Auckland community, and the Club has played an active and sometimes pivotal role in the history of New Zealand’s largest city.

The club from time to time features concerts combined with a dinner and these are conducted in very intimate settings. To get ready for the Gypsy Jazz concert we were required to hire a a stage and bring in sound gear, lighting and hire a mixing engineer.
The concert was held in the Winter Garden and after rather extensive sound checks we were able to produce a great sound with the help of Paul Johansen of Stage Sound Ltd and mixing engineer Paul Crowther, a respected engineer and ex drummer for Split Enz.
The audience were made up of members and their guests and there were around 114 lucky people who were eagerly entertained by this talented group.